You can pre-order the new CD over at Amazon.com. There is a sample track streaming embedded into the EW.com Article. Below is the cover art and the track listing: 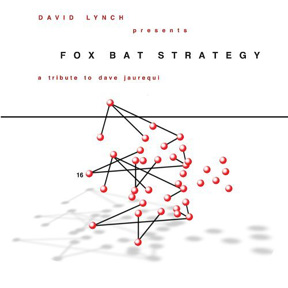 Note, some websites include a seventh track titled “I Dream of You” however, it is not currently listed on Ryko’s site.

The album is a tribute to Jaurequi who died in 2006. For those of you who remember, Jaurequi is the guitarist who played on the “Pink Room” and Blue Frank” tracks from the Twin Peaks: Fire Walk With Me album.

Here is Amazon.com’s description of the new CD:

A long-time pet project of film director David Lynch (Blue Velvet, Twin Peaks, Mulholland Drive), Fox Bat Strategy features a cast of musicians who began collaborating with Lynch surrounding the filming of Twin Peaks: Fire Walk With Me. The same line-up of players appeared on Fire Walk With Me’s two roadhouse cuts: “The Pink Room” and “Blue Frank” (as well as made cameos in the film itself). In 1994, these same musicians, with an invitation from Lynch, re-entered the studio for experimental collaboration. What emerged were these 6 tracks. For nearly fifteen years these songs have remained unreleased and unheard, slow-cooking in the ether of time, all the while retaining a uniquely modern sensibility. This release is a tribute to the album’s late singer and guitarist Dave Jaurequi, who passed away suddenly in 2006.

Thanks to Ivan for the news. Discuss this item over at the Discussion Board.