The East Coast arm of the American Film Institute, AFI Silver Theatre and Cultural Center in Silver Spring, Maryland will be running a new 35 mm print of ERASERHEAD, including a couple of Midnight Shows.

Information about the ERASERHEAD screenings is available at: 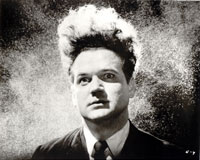 On the last show on Saturday, May 16, one lucky ticket holder will have the chance to win a (1) ERASERHEAD 2000 Limited Edition Collector’s DVD Box Set, autographed by David Lynch! A runner up will receive (1) David Lynch “Signature Cup” Coffee Gift Set (containing Organic House Roast, Organic Espresso, and Organic Decaf French Roast). In addition, they will be doing a one time screening of LYNCH, the documentary on Sunday, May 11 at 5:30 p.m. If you are in the area, be sure to check it out!