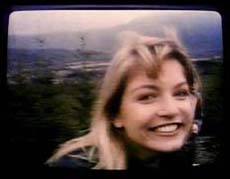 Don’t waste your money on this product. This review has been left online for archival purposes. Get the Pilot in the Gold Box set from CBS Home Video.

Well, this is the first time I have ever written a review, so I’m going to try and keep it short and sweet, and just cut straight to the chase. I read great DVD reviews all day on sites like DVDfile, so I think I’ll borrow their review format with this disc.

As many may know, about a month ago, copies of a supposed Twin Peaks: Pilot on DVD started floating around on various auction sites such as Ebay. Known on the internet as the “Hong Kong Twin Peaks: Pilot DVD” (probably because the first dealer to sell the DVD on Ebay was from Hong Kong) many, including myself were skeptical and understandably called it a bootleg at first glance. Taiwan is well known to have a very “thumb to nose” attitude when it comes to International Copyright Laws, and has been a source for movie bootlegs in general. The fact that it is not Regionally Coded, and also bears the “Republic Pictures” logo (a subdivision of Spelling Entertainment which was shut down many years ago) definitely raised some eyebrows. (For those of you that don’t know, Region 0 DVD’s can be played in all DVD players, and not just in the players of the specified region.) Well, I will tell you that we all were wrong. Upon getting a rave review from a really cool Ebay recipient of the DVD, I quickly contacted the seller on Ebay and arranged to get a hold of a copy for myself.

It seems that a company from Taiwan called Catalyst Logic has put out a limited release of the Twin Peaks Pilot as part of their “Silver Screen” series. Now in the US, I didn’t think Republic Pictures had any rights to the Twin Peaks Pilot, otherwise we wouldn’t have all these legal delays on the Pilot (owned by Warner Bros.) and Series DVD’s (owned by Artisan), however, in this instance, Republic Pictures has their name all over this Catalyst DVD. They even have trailers for other Republic Pictures movies included on the DVD. Alright. Enough babble about legal issues on this one. Illegally released or not, it was officially distributed and released in Hong Kong, and here’s what I have found:

This is the best the Twin Peaks Pilot has ever looked. (Well, aside from the big screen at last years Twin Peaks Fest) The disc has a surprisingly crisp and clean picture. I played this with a switchbox against the Warner Bros. Pilot Laserdisc, and the DVD did to the Laser Disc what Agent Desmond did to Deputy Cliff in FWWM. However, beware there are noticeable artifacts, and minor distortion is apparent in some scenes. Why this is, I’m not sure. they are not so horrible, that they detract from the presentation, but they are noticeable. The dark scenes were done very well IMHO. Minor dust specs on the print every once in a while, but much cleaner than the laserdisc.

The audio has received a FULL aggressive 5.1 remix. Lots of the sound effects are appropriately panned to the rear surround speakers. One thing you definitely want to do is turn your back speakers down a bit, as they can often be distracting. The bass seems to be a bit much at times, but again, a slight adjustment on your Home Theater system can easily correct this. One specific moment that was a good use of the rear surround is when the translator mentions how “Health und Industry They Go Hand De Hand”. The response laughter of the Norwegians are panned to the back speakers and give a “Room Full of Laughing Norwegians” effect. It is clear that whomever remixed the sound did so from a sound reel master.

Now the DOWNSIDE. There are a few things that bother me about the sound. First off, when comparing it to the Laserdisc, I noticed right away it seems that whoever mastered the movie (I assume) transferred it from a PAL Master. It’s the only explanation I can think of for why the pitch of the sound is about a half step too high. Also, the sound although pretty good for the most part, sounds definately out of phase in the Center Speaker during parts with music in the background. Although it is annoying at times, it is not completely a loss. So be warned !

Well, there’s not a lot here. You get a nice Scene Access menu, along with Character Biographies for Joan Chen and Kyle MacLachlan. You also get treated to some awful Republic Pictures trailers for “One Against the Wind”, “Class Cruise”, “Live Nude Girls”, and “Witchboard 2: the Devil’s Doorway”. My advice… skip them.

All I can say is that I was very surprised by this release. Although playback is 4% faster than it should be, it is a nice addition to a Twin Peaks Fan’s collection. The DVD comes only with a 5.1 soundtrack, as the original 2-Speaker Surround soundtrack is absent. The picture is great minus the artifacting, and the sound is bad, but not a total loss. Expect lots of phase problems in the center speaker. Finally having the Pilot as it aired on Television as opposed to the extended European version is a Twin Peaks Fan’s dream come true. I would recommend this to any Twin Peaks fan that wants to get a clean copy of the Pilot on DVD. For now, this is as good as it gets. At this point, who knows when Paramount will be getting their act together.

My best advice is don’t pay more than about $30 post paid for this puppy, (I knew I should have waited) as they are popping up all over Ebay and Online DVD Retailers shipping from Hong Kong.